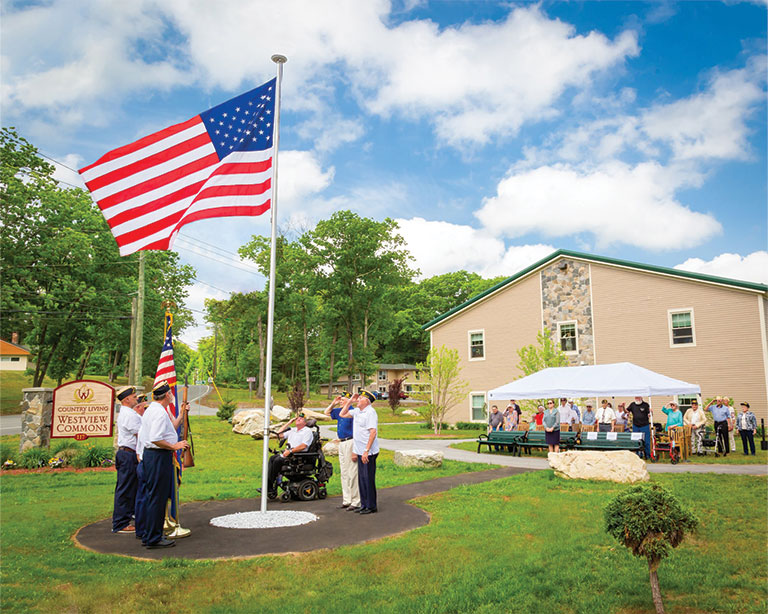 The residents of Country Living at Westview Commons proudly hailed the recent installation of a new flag pole and the unfurling of its first American flag at the Dayville, CT independent and assisted living facility. There is a strong ripple of patriotic pride evident in the community at Westview Commons; many of the residents having served their country in the armed services, law enforcement, or other forms of preserving American security. In the hearts of all Westview Commons residents exists a pride for this country’s exceptionalism, opportunities, and heraldry—whether directly or indirectly determined in their lives. Installing the prominent flag pole on the immediate corner of the facility’s entrance and displaying the majestic beauty of the 8’ by 10’ United States flag for all who approach affirms multiple truths. The patriotism that is so clearly inside the hearts of Westview Commons residents now projects outward to the Dayville community, and it reflects inward to give the residents even brighter pride in their country.

The patriotism that is so clearly inside the hearts of Westview Commons residents...

To commemorate this new facility landmark, Westview Commons organized a grand ceremony to dedicate the first American flag raised there. Fittingly, this occasion was scheduled just before Memorial Day. The soldiers who gave the ultimate sacrifice to protect this country were in the hearts and minds of everyone present. The event was attended by dozens of Westview Commons residents, their families and friends, and distinguished guests from our region. While several rows of benches and chairs were provided for the attendees, the moment soon became a standing-room-only crowd. Westview Commons’ Activities Director Louise Taylor hosted the proceedings as the Master of Ceremonies; guiding the audience with her own reflections and introducing the guest speakers and presenters.

Members of the J. L'Homme-Wm. F. Burdick, Jr. American Legion Post 21 (based out of Danielson, CT) served as the Color Guard to begin and conclude the proceedings. Bob Kelly, Tom Gaylord, Mike Barta, Mark Dauphinais, and Chaplain Chuck LaLumiere entered with their own flags, and performed the opening formalities. Post 21 Chaplain Chuck LaLumiere recited a prayer, and now the time came for the Westview Commons United States flag to be elevated. The two Westview Commons residents that proudly wanted to raise this first flag were then introduced to the attendees. Residents Donald Church and Richard “Morrie” Morrison (both Veterans of the United States Air Force) made sure to present themselves in their finest attire. This included their own membership hats from American Legion Post 21. Their dignified sense of duty was apparent as they stepped forward for this momentous moment among their neighbors and friends. The blue, tri-folded ensign covered in stars was carefully unfolded and delicately attached at the anchor points of the pole’s rope. Their eyes—and the eyes of everyone in attendance—fixed on the rising red, white, and blue standard, the resident Veterans brought the flag to its proper height and brought those in attendance to their feet.

Donald Church spoke about the meaning of serving a role for your country’s Armed Services, and serving as a participant at an event such as this. “I am always proud of the time I served, and I make sure to attend as many parades and commemorations as possible. Every time I see our flag, I get goosebumps. Now I can look out my window and see it every day, and it really, really looks great,” Mr. Church stated.

With the stars and bars now waving in the gentle breeze that day, all those present who were able to stand were asked to rise and recite our Pledge of Allegiance. Connecticut State Senator Mae Flexer (representing CT State Senate District 29) attended the Westview Commons flag dedication, and at this time she was invited to offer remarks to her constituents residing at Westview Commons. Senator Flexer began by speaking from her heart about the significance of honoring our Veterans, past and present, by prominently displaying the American flag, and by celebrating and contemplating our national beacon at dedications such as the one hosted by Westview Commons. Senator Flexer went on to read a poignant piece that was written by her father for Memorial Day observances over 50 years ago. Howard Flexer is also a Veteran of our United States Marine Corps, and he has fulfilled posts as the Chaplain for several local Veteran’s organizations. Reading his essay made Westview Commons’ flag dedication even more of a full-circle moment.

Post 21 member Bob Kelly then approached the microphone to recite another tribute written for Memorial Day; reminding the assembly of the supreme respect that is to be shown for our fallen American heroes. Just following his remarks, Pam Filmore played “Taps” and stirred even more emotions as the somber, yet sweet, notes of this bugle call echoed in the outdoor setting and in the minds of everyone gathered. At this point, all in attendance joined together to sing “God Bless America,” with the nearby birds contributing their vocalizations as well. To close the dedication, Post 21’s Chaplain Chuck LaLumiere read an inspiring benediction prayer to further remind why it is vital to respect the great symbol of the American flag—for our own benefit, for the benefit of the world, and because of the tremendous sacrifices that have been made to preserve the American way.

all in attendance joined together to sing “God Bless America,” with the nearby birds contributing their vocalizations as well...

The American flag now flies with majesty at Country Living at Westview Commons: a strong symbol waving in an easy wind. Following the dedication, Westview Commons residents and their guests returned inside to enjoy entertainment from Val Rogers, a frequent patriotic performer at the facility. Val Rogers (a former USO entertainer) has sung at Westview Commons events such as Veterans Days and Fourth of Julys in the past; her pianist Bill Groth always joining her. On this particular day, Val was also accompanied by a bass player, a drummer, and a voice student who has been learning from Val’s signature star-spangled style. Hearing their songs in the air and seeing our American flag in the air painted this perfect scene in red, white, and blue. When traveling down Route 21, approaching Westview Commons from East Putnam, this new flag pole appears to be in the middle of the road as an optical illusion. There is no illusion that a steadfast stripe of American pride ripples throughout Westview Commons. This new flag pole and the United States flag has already proven its profundity to Westview Commons residents, and to the Republic for which they stand, it will continue to convey constant inspiration for American ideals.