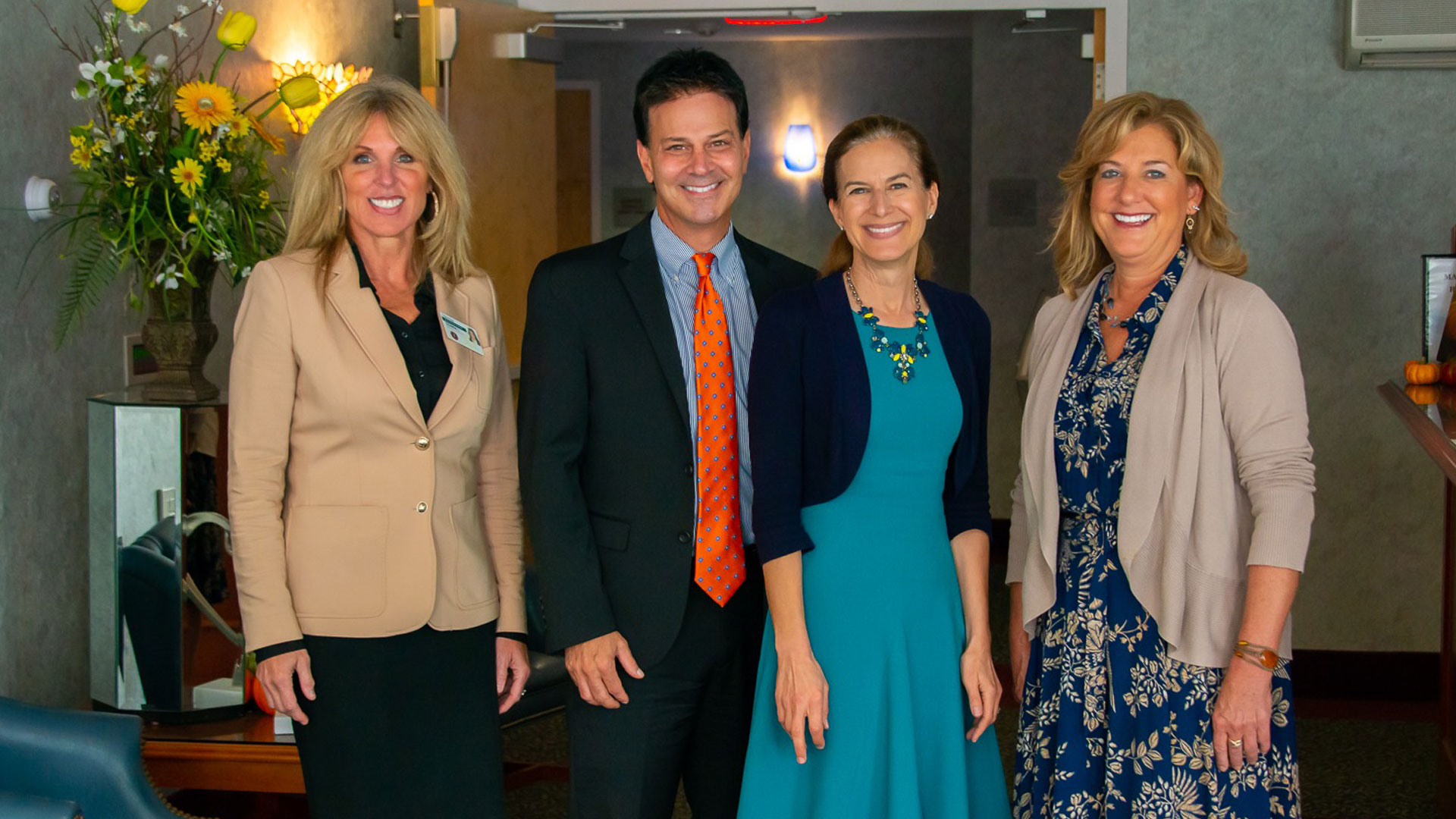 Lieutenant Governor Susan Bysiewicz made an extensive trip through Westview Health Care Center and the future site of Country Living at Westview Commons, touring the Dayville campus on September 17th. Her trip was wide-ranging in both subject and space. She and her contingent covered ground everywhere from the main entrance, through the various wings of the facility, and all the way to the construction site across the street into the 75 unit and 115,000 square foot structure that is presently being built.

On this day Lt. Gov. Bysiewicz was the esteemed guest of Westview Administrator David T. Panteleakos and Westview Commons Executive Director Donna Copeland. Given her busy schedule, the Westview leadership greatly appreciated the visit. The tour began with an entrance through the main lobby to the second floor of the nursing facility. At that particular time the Therapeutic Recreation Department was running a game of “BINGO” for the patients, and the Lieutenant Governor could not pass by the opportunity to step into the action. Recreation Director Louise Taylor happily handed off her duties as the number puller for the moment, and the two of them performed several spins and draws with extra enthusiasm. In fact, Lt. Gov. Bysiewicz would not depart until she had called enough numbers to determine a winner. If ever an example was needed to show that Susan Bysiewicz is a champion for the people, this is as good of an anecdote as any.

The trip continued down each of the wings of the 103 bed skilled care facility, affording additional residents and patients with opportunities to interact with the Lieutenant Governor. Many Westview staff members greeted the party as it traveled through the residence to the Outpatient Aquatic Therapy Center where Lt. Gov. Bysiewicz met Director of Therapies Phuong Nilo; then moving on to Westview’s Sports Medicine Department where she was greeted by Alex Williams, the Director of Sports Medicine. Throughout these engagements, Westview’s Director of Finance Donna LaHaie accompanied the party and provided key insights into the history—and future—of the organization as it builds on the prospect of Country Living at Westview Commons.

Next stop: the construction site. More discussion complemented the walk as the group headed outside and across the street. As they walked onto the 117 Ware Road property and entered the steel-framed and wooden-sheathed structure, hard hats were a necessary accessory; but this is nothing new for Lt. Gov. Bysiewicz. She is often seen sporting such headwear, as she covers Connecticut to learn about new opportunities in construction and industry.

About her trip to this section of the quiet corner, Lieutenant Governor Bysiewicz remarked: “Governor Lamont and I like to visit all kinds of businesses and we're particularly interested in health care because that is one of the strengths that Connecticut has. It was nice to visit the long-term care part of Westview and then, to come over here and see the construction of these beautiful independent and assisted living units that will be opened in about a year.”

Walking through the active construction of the various corridors provided even more opportunity for David Panteleakos and his team to elaborate on the details about this state-of-the-art facility. The physical scale of the building, its hallways, the residences—all could easily be visualized because the structural silhouettes are there. When the crew ventured up to the second floor and down the long hallway of “Wing A” they were able to gaze outward at the footprint of the grand dining room and the perpendicular positioning of “Wing B,” with its underground parking garage and cement footings now supporting its own network of steel.

This first-person perspective lent itself to easy explanations as the securities, amenities, and luxuries of Westview Commons were detailed. The conversation between Lt. Gov. Bysiewicz and the Westview leadership on this day was as much about physically looking into vast spaces with opportunities in mind as much as it was about looking into an expansive future. Executive Vice President and Administrator David T. Panteleakos stated, “We are very appreciative of the fact that Lt. Gov. Bysiewicz traveled to tour our facilities; and engage with our residents and health care professionals. Caring for our senior population is vital to the social fabric of our community and the Lt. Governor asked all the pertinent questions of a health care provider and employer that I would have expected. We were all very impressed with her!”

Subscribe to our email newsletter to receive updates and news.