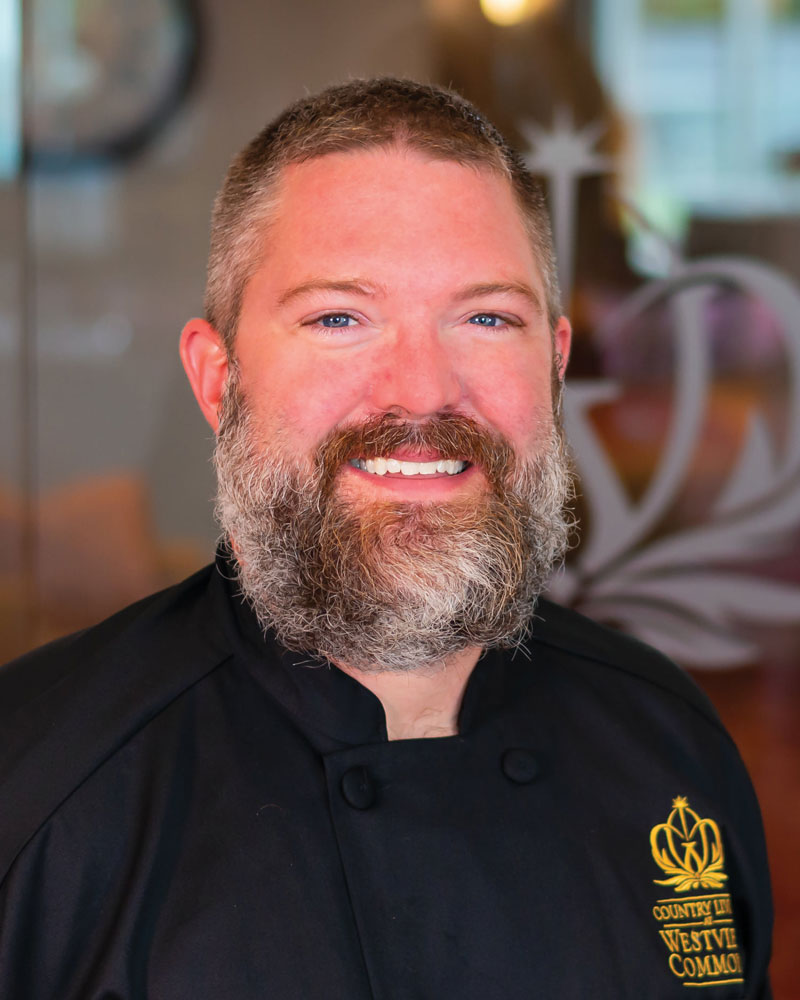 “Of all the things I’ve learned to cook, one of my favorite meals is just a perfectly roasted chicken. The type of recipe that doesn’t really need to be a recipe: combine a full bird with some potatoes and vegetables, and just let it bask in medium heat for a long time. You wait to see the skin crisp and crackle a bit. You smell this unique aroma. It’s an experience in the kitchen that, as a chef, lets you know you’re about to deliver an amazing dish.”

That understanding of gourmet cuisine as well as traditional home-style cooking belongs to Jeffery Hemmig: the Chef of Country Living at Westview Commons. This grand, new Independent and Assisted Living facility in Dayville, CT presents its residents with a lifestyle they deserve. From the earliest conceptions of Westview Commons the owners and leadership wanted expert-quality food offered three meals each day. Jeffery Hemmig is the chef to deliver such plates.

Around age 5 Jeff and his family moved from Redwood City, California to Massachusetts, then to Brooklyn, Connecticut a year later. While he holds a few treasured memories from his years in California he considers himself a New Englander through and through. Throughout his youth, Jeff recalls sharing homemade dinners 6 or 7 nights each week with his family. While he wasn’t doing a lot of the cooking during those years, it is there he learned the importance of meals as a means of bringing people together.

“I think food needs to be more than nutritional, filling calories that taste good—though I firmly believe in that! The broader point is that food is at its best when it can be a part of the conversation between the people gathered.”

Food is at its best when it can be a part of the conversation between the people gathered.

During his high school years at The Woodstock Academy he acquired a job at a popular Brooklyn area restaurant. Jeff exhibited a determined work ethic in its soggy, steamy dish room, and thus, gained the attention of the chef/owner who one day asked him to join the line of cooks. He warmly recollects: “I learned to hustle there!”

Jeff remembers this restaurant’s massive menu; ranging between salads and soups and steaks and pasta dishes and seafood and pizza and deserts—the list went on. He experienced a rapid indoctrination to cooking as a result. The earliest instances of Jeff’s culinary passion emerged.

Through all of this, Jeffery Hemmig always planned on a career in the military. Just before graduating high school he was in a bad car accident; breaking his back in multiple places, narrowly avoiding spinal damage. He knew: this ended his ambitions for armed service. He didn’t quite know what to do with the rest of his life. He enrolled at Quinebaug Valley Community College and took on a few jobs in various restaurants and industrial manufacturing facilities to keep his life moving forward, but ultimately sensed that he had a greater calling in the kitchen. He applied to Johnson and Wales University with the intention of studying culinary arts. He dedicated the time to professionally honing his skills and graduated from JWU four years later. Looking back on his whole life through the perspective of cuisine formed the reason he emphasized his studies on traditional techniques for cooking well-rounded meals.

“I suddenly remembered all those Jacques Pepin and Julia Childs shows that I would watch as a kid. I remembered those family dinners—and how—good preparation of food leads to great moments around a table.”

Good preparation of food leads to great moments around a table.

He held an internship at one of Putnam’s finest restaurants, and then gained employment at the same location. After years of contributing to the local gourmet food scene there and at other area restaurants, the growth of his own family provided him a perspective he hadn’t possessed before. Jeff and his wife welcomed their son into the world about 5 years ago. Country Living at Westview Commons presented him with what he considered an ideal fit for his unique skills at this point in his life.

Regarding his ambitions for Westview Commons’ kitchen, Jeff wants to be a crowd pleaser more than a daredevil showman. In his words: “For our residents here, I’m much more interested in what they want me to cook versus what I want to cook. I consider myself almost a performer in that way.”

Jeff plans on working with his dedicated staff to evaluate the optimal choices for the residents of Country Living at Westview Commons. He looks forward to this evolving menu, finding ways to blend his grand inventory of culinary knowledge with the desires of Westview Commons residents.