fo The Return of the Bald Eagle | Westview Commons

The Return of the Bald Eagle 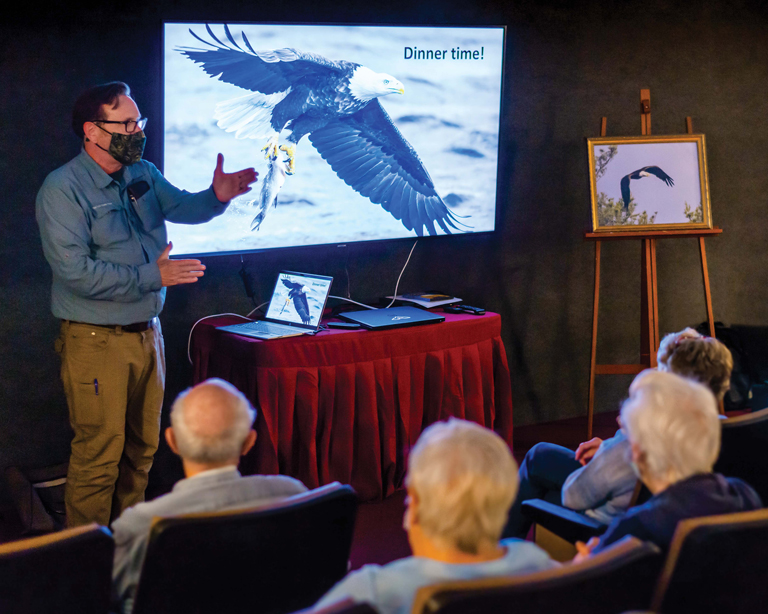 The Return of the Bald Eagle

This week, the growing population of Country Living at Westview Commons was enlightened with a presentation about another growing population in Northeast Connecticut: bald eagles. Our country’s majestic national bird (Haliaeetus leucocephalus as it is named scientifically) is benefitting from enhanced protection and innovative efforts to boost its wild population in Southern New England. Chief Ranger Bill Reid from The Last Green Valley spoke about bald eagles and the work to increase their ecological success within our region during his talk titled: “The Return of the Bald Eagle.” He delivered this information to the Westview Commons community as a multimedia presentation in the facility’s Picturedrome Movie Theater and opened up a conversation among the attending residents about the recent successes of this stately species.

Ranger Reid described efforts to eliminate the human use of harmful chemicals that degrade the egg quality of bald eagle offspring while also improving the human understanding of better nesting needs for bald eagle populations. He described the inter-state work of Connecticut and Massachusetts wildlife professionals to monitor bald eagle numbers in New England through identification bands around their legs: typically, banded birds will have one anklet representing their state designation and another to signify their registry with the US Fish and Wildlife Service. Locations where bald eagle nests develop are protected by new laws and regulations to avoid human disruption, and as a result, fledgling eagles now have higher success rates in our area. Ranger Reid relayed this information to the residents of Westview Commons in his conversation with them and it is clear that he found a responsive audience.

“This new facility here is phenomenal and the amenities are fantastic. I do a variety of talks and they’re all related to the things that we have here in The Last Green Valley National Heritage Corridor.” Bill continued: “I love how people get more interested in our work when they have more information. Maybe they see something and say to themselves ‘hey I could get involved with that project’—just like Ron Tillen here at Westview Commons. He’s very active with the Windham Land Trust! I am so appreciative of any chance I have to engage with new groups and introduce this information. This is a wonderful facility and I’m glad to see this community expansion.”

"I am so appreciative of any chance I have to engage with new groups and introduce this information. This is a wonderful facility and I’m glad to see this community expansion.”

Ron Tillen and his wife Gwyneth have lived in Northeastern Connecticut for over 50 years and currently reside at Westview Commons. Ron and Gwyneth are strong proponents of the preservation of this region’s natural resources and its historical beauty. They have become especially passionate about these subjects through senior educational opportunities in our area and they enjoy seeing presentations like “The Return of the Bald Eagle” held at Westview Commons. As an avian advocate, Ron is very pleased to know about the increasing bald eagle population, commenting:

“It’s a very reassuring story to hear that the bald eagle has come back, and it shows what concerned people can achieve if they take care of the things that affect our climate and our animal life. It gives me hope because I know that when we host more of these discussions at Westview Commons, they can be some of our best productions and can create new opportunities for residents of our area to have a beneficial environmental impact.”

One such future opportunity developed on the spot during Ranger Reid’s discussion. Another Westview Commons resident, Mel Tenenbaum, is an accomplished professional photographer and captured a beautiful picture of a bald eagle flying over Webster Lake this summer. Mel had this image framed and was happy to lend it as an extra visual for the presentation. Ranger Reid talked with Mel about the setting where he saw this bald eagle, and this led to further descriptions of areas where bald eagles can be seen (from a safe distance, that is). Before the assembly concluded, the two men discussed ways that photo enthusiasts can participate in some of these local observations through the nature walks that The Last Green Valley promotes.

Although there were no live eagles present at this event to showcase their beauty, there is already a plan in the works to bring some feathered friends to visit Westview Commons. Ranger Reid spoke of a raptor rehabilitation group in Ashford, CT named “Horizon Wings” that performs important work caring for birds of prey that cannot be released back to the wild. Despite their physical limitations, their birds are especially effective educators in the presence they provide during Horizon Wings’ programs. The Westview Commons community eagerly awaits a potential eagle event. Westview Commons’ Activities Director Louise Taylor loves to connect the residents with knowledge they crave like this.

“The presentations are so interesting and this is an educated and lively group. They want to hear what’s going on in Northeast Connecticut, whether it’s educational, informational, or recreational,” Louise said. “I’ve known Bill (Reid) for many years and he’s joined us across the street at Westview Health Care Center before—I know people love his presentations. He gave use a great lead for another program that sounds so exciting: bringing live birds of prey to visit us here at Westview Commons!”